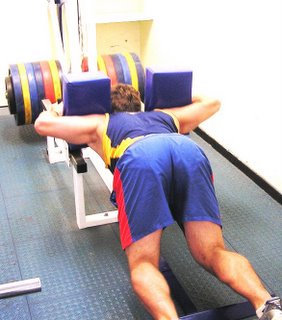 One aspect with Bobsled that I wished was further explored is rendering a formula to improving push clearance with the start. Oddly their is very little research and proposed theories on the best way to get a sled to it’s fastest escape velocity. Unlike track where countless conferences exchange great kinetic and kinematic data, the sport of bobsleigh doesn’t have the economic resources to investigate such criteria. After a few cups of Dunkin Donuts I decided to take my information from my colleagues and create my own checklist of ways to mod a push start. Obviously I had to ask a few questions from the PHDs on calculating friction based on non-parallel vectors but most of it was simply stealing the information from others, be it in the sport or outside the sport. Unlike some of the self proclaimed experts, I share where my information is from as the context of the information is arguably more important.

Let’s say you have a bobsleigh athlete that weighs 80 Kilos and is able to run 30m (track style) in 3.96 (without reaction time) and is able to jump 90 cm, that athlete has enough raw speed and power to strongly suggest she is able to push 5.47 in the standard individual push test if she set’s her ankle and shank lines in a way that will allow a great double leg projection while setting up the first 6 steps to allow a flawless exchange of shin angles that transitions to the last step before they enter the sleigh. What is of great help with women is the fact men provide some answers of what can be done as even a WR in women is not even qualifying for men in the given sport. This leads to a easier path of learning as men have done it before at a higher level. No need to reinvent the wheel when a clear list of prerequisites are given. Based on the last push championships the best performance by a brakeman was 5.59 and the record for Canada is currently listed at 5.53 by Heather Moyse. I am not interested in records done in championships as only a few are done a year and like we have seen in practice throws in the shot-put you can see what is possible. I am am interested in what was done in any circumstances provided it was not mythical but recorded electronically under the same circumstances.

Currently I am unaware of the performances up in Calgary was analyzed with data that I could use but observing other performances internationally it is clear that this time can get down to 5.42. Is that the limit? I don’t know. Remember the testing is being done on athletes where most likely those that did not make it in their respective sport originally, as I would have loved to see a 5-9 world class sprinter get on a mass gaining program and push disgusting numbers. But alas, you are not going to see an elite sprinter give up millions to do a sport watched by a narrow audience when she can earn gold in her sport and make millions.

Frankly I don’t agree with the correlation proposed by William E. Garrett, Donald T. Kirkendall in Exercise and Sport Science with the pure score of vertical as many athletes can jump high with internal loads but those that clean 1.5 your bodyweight are likely to have the same power but better strength scores needed with lower velocity outputs with external loads. Simply put a bobsleigh athlete that can jump 90cm with 120 kilos is a better investment than an athlete with 90 kilos and can jump 92 cm, be their technique (technical execution) is the same and the lift is done to maximize wattage not load transfer. My next post will review some of the set-up demands of the start and who track can help those in the sport push faster times.
Discuss entry