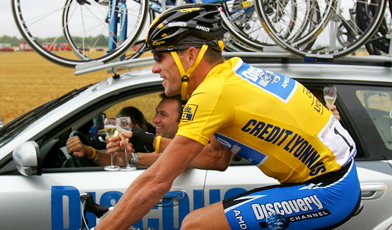 Apparently, the greatest cyclist of all time, Lance Armstrong, is making a comeback. He intends to ride in the 2009 Tour de France. This is interesting and provides for some more discussion material on the differences between seemingly similar sports. Like track, cycling is a physical performance based sport (rather than strategy, gamesmanship, team oriented sports, etc) that is generally quantitatively assessed with a clear and easy to understand rank of performances. Physiologic capacities are tested to the limits in both sports. However, that’s about where the similarities end.
Like swimming, cycling is a sport that provides an opportunity to compete and succeed at an elite level much longer than track and field athletes have. Unlike Michael Jordan’s last comeback, or Edwin Moses’ attempts at a comeback, I actually fully expect Lance to fully succeed and become one of, if not the top cyclist in the world. We know from his stints at marathon running that the guy has been very active in his 3 years since retiring. In a very short period of time with pretty little training, he became a pretty competent (if underachieving) marathon runner. We can also assume that the sport of cycling is no where near as taxing on the body because like swimming, it is a non-impact sport. In fact, cyclists aren’t even likely to experience the shoulder overuse injuries that many swimmers face.
On top of that, Lance is a physiological marvel. He’s the Usain Bolt or Michael Phelps of his sport. Count me in as an interested observer.
Discuss entry