You are at:Home»Mike Young's Blog»American Track Meltdown at the Olympics- Perception or Reality 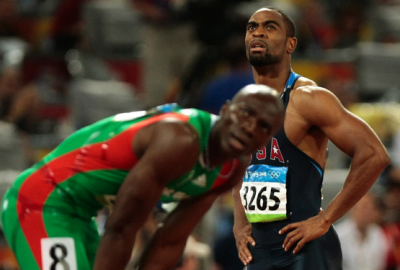 It’s been widely stated (1, 2, 3, 4, 5) in the media that the American track team had a complete meltdown in Beijing. USATF’s new CEO, Doug Logan, has even gone so far as to say our recent failures in Beijing may warrant a shakeup of the infrastructure of the organization. I mean, even when we won, it seemed we had really lost. At the close of the games, the U.S. had won 23 medals. Is this so bad or is all this fuss something beyond anyone’s control? I mean, who did we have that was going to run 19.29 in to a -0.9 m/s head wind to save the day for the U.S.? What 4 were we going to put on the track to run 37.09 to hold back the Jamaicans in the men’s 4x100m? When you look at the medal counts you’ll see we won only 2 less medals than we did in Athens and only one less gold. Also, we had some big performances that have gone largely overlooked in all this meltdown talk…Stephanie Brown-Trafton winning the women’s discus, Harper winning the hurdles, taking 8 of the 9 medals in the men’s 200m and 400m races (including 400m and 400H).

So was this a case of a true meltdown or are we just looking at the most high profile events (100m and 4x100m) and extending our failures there to the entire team?
Discuss entry