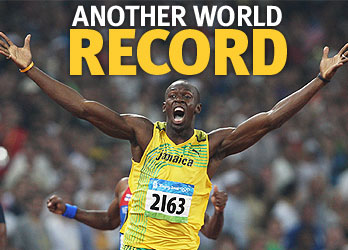 Flashback 12 years- I’m sitting on my couch with my good buddy Sean watching the NBC Olympic coverage of the 200m. It was a moment I’ll never forget. We sat in awe through Michael Johnson’s unbelievable 19 seconds of glory and I actually fell out of my seat when the time flashed up on the screen….19.32. MJ had obliterated his own previous world record by a whopping 0.34 seconds and beat back several legends in the sport by an even greater margin. I’m usually pretty laid back when watching track but I distinctly remember getting up off the floor and repeatedly saying Oh my God. I had never seen anything like it.

Flash forward to yesterday. The men’s 200m at the Bird’s Nest. After his unbelievable 100m race only days before, the world was abuzz that Usain might be able to break MJ’s hallowed record. I had previously gone on record as saying that I didn’t think he’d get it this season; but that was before he ran 9.69 while shutting it down with 20-25m to go. He proved me wrong.

Yesterday Usain proved what NASA scientists have known for a long time….that lightning does strike twice. With his 19.30 for 200m, he moved himself in to uncharted territory for sprinters. Not only did he complete the rare Olympic 100-200 double (last achieved by none other than Carl Lewis in 1984) but he did so with world records in both events and the largest margin of victory in modern Olympic Games history. For goodness sakes, his closest competitor in the 200m was over half a second slower than the Jamaican Sensation. If we uphold the final results (and take out the lane violations of Spearmon and Churandy) he was 0.66 seconds faster than the next fastest man. That’s 2/3rds of a second. That’s nearly an eternity squared in world class sprinting. That type of margin of victory is normally reserved for the East Sheboygan County Games or swimming pools. To put it in to perspective, his margin of victory means that of the 6.7 billion people on this planet that the next closest competitor was almost 3.5% slower. That defies probability in practically every sense of the word. It means he is an outlier among outliers. More so than even Carl Lewis and Michael Johnson.

Right now, I’m in awe of Bolt. I really don’t know what to say. I’m a HUGE fan of Michael Jordan. He’s my idol in many ways. I admired for his pursuit of excellence, his competitive fire, and his ability to dominate even the best competitors. I feel almost guilty saying this, but the thought has actually crossed my mind to think that Bolt might be even more dominating than my main man Michael Jordan.
Discuss entry