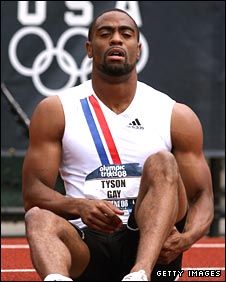 There’s so much good stuff to write about with this year’s Olympics I’m going to do a couple series and keep writing as the Olympics go on. The 100m is one event that I’d really like to take a closer look at. If you didn’t know, the results are in and a new person has claimed the title of World’s Fastest Human. Since the TV broadcast isn’t on until tonight and I know some people don’t like spoilers, I’ll save an analysis of the final for later. What we can safely look at though is Tyson Gay’s performance. As you may know, Tyson didn’t make it through to the finals, finishing a disappointing 5th place in his semifinal. While not totally shocking given his recent injury, this is certainly not the expected outcome. I think many were thinking Tyson might have been the favorite for gold given his absolutely dominating performance in Eugene. Remember, in Eugene, Tyson ran an American record in the 100m (9.77) as well as the fastest 100m ever run under any conditions (9.68) and basically crushed a field of great sprinters. I was at track side for most of his races in Eugene and to say he was dominant would be an understatement. Then came the 200m…and what might have been the beginning of the end for his quest for gold. In the 200m, Gay hurt his hamstring. His people suggested that it wasn’t a big deal and that he’d be ready to go but I had doubts. When he pulled up, he had the characteristic I’ve been shot by a sniper reaction that is so common in severe acute hamstring pulls. Then he pulled out of the London Grand Prix. Was the injury that bad or was he just playing it safe? No one outside of his immediate circle knew at the time. Then came word that he was pain free and had just done a hard workout several days ago. Some took this as good news, I didn’t. In that article, not only does it say that Gay hadn’t done all-out sprinting in the 5 weeks between Eugene and Beijing until 5 days before the biggest competition of his life, but it also said that he ran a 100m in a hand timed, self-started, 10 seconds. Sounds impressive, but really that’s probably only worth about a 10.4 or 10.5 second 100m for an electronically timed 100m. Not the type of workout that a soon-to-be Olympic Champion boasts about. Then came the rounds where Tyson looked like he was laboring and definitely appeared to be favoring the injured leg. And in the semis, Gay finished a disappointing 5th place and didn’t advance to the final. I’d imagine that’s probably the first time that a reigning World Champion didn’t qualify for the start of the Olympic 100m final.

So in the course of about 5 weeks, Gay went from running a 9.68 wind-aided and 9.77 wind legal 100m to being a 10.05 sprinter over 100m…a drop off of 3/10ths of a second in just over a month. The questions now that we can all learn from and that I’ll try to explore in later entries will be how much of the performance decrement was due to the injury? How much was due to the hit in confidence that Gay undoubtedly took when he got injured at the most inopportune time? And what could have been done (if anything) to allow Gay to have maintained his Eugene fitness?
Discuss entry