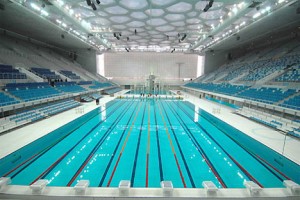 In case you’ve been in a cave, you’ve noticed that there have been a TON of world records set in the swimming events at this year’s Olympics. So many I didn’t even bother to count (I’ll save that for after the swimming events conclude tonight). To most track fans, this is a foreign concept. In track, world records are almost sacred. In many cases they don’t get beat for 10 or even 20 years. In swimming, it seems they are broken both with regularity and in unbelievable fashion. We’ve already had some discussion why this might be the case but two interesting articles I found may shed more light on the issue. The first article is from the mental floss blog and actually gives six reasons why records are dropping like flies:

The second article actually poses a different viewpoint…basically saying that the pool would be even faster if the designer had had his way. Originally, his team wanted the pool to have porous walls, that would really absorb waves and reduce turbulence dramatically. They also apparently wanted to put flaps on the starting blocks that would give swimmers something to push off from. Apparently one of both of these advancements will be present at next year’s swimming world championships where everyone (spectators, coaches, trainers, and athletes) in attendance is expected to break world records.
Discuss entry