You are at:Home»Mike Young's Blog»Perpetuating Myths of Olympic Size Proportions 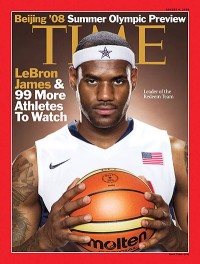 The August 4th Olympic Issue of Time magazine was a special issue focusing on the Olympics. It was the one with LeBron James on the cover (with duplicate covers for Liu Xiang and Dara Torres). The cover article gave brief rundowns of athletes that you should follow during the Olympics. I read through all of them. Half the names were familiar. One thing stood out though, and it’s also come up in the NBC broadcasts about every 20 minutes, is the complete and total misinformation of the general media on lactic acid and / or lactate. In the feature on Phelps (rated the number 3 athlete to watch), the article states this:

Hardworking muscles release lactic acid, which causes soreness. But Phelps’ body can flush out lactic acid in minutes vs. the hour or two it takes the bodies of most athletes.

This is wrong on two fronts. First lactic acid DOES NOT CAUSE SORENESS. Heck, it doesn’t even cause fatigue. Research proved these thoughts wrong about a decade ago. Second, it doesn’t take anyone 2 hours to flush lactic acid much less a highly trained athlete. The spreading of this myth is one of my pet peeves but unfortunately, it willl continue to be perpetuated until someone informs the general media that they are wrong.
Discuss entry