Yesterday my alma mater, Ohio University, dropped their men's track and swimming programs. This is close to home for me. I earned two degrees at OU, I ran at OU, I coached at OU, I met my wife at OU, my wife pole vaulted at OU, my uncle-in-law was an All-American pole vaulter at OU (he is still the school record holder), my father-in-law played football at OU, and my wife's grandfather was the greatest swimming and diving coach in OU history. Although OU track hasn't been too great in the past 5-6 years they have been improving lately and the program has a storied past, with several NCAA champions and even a couple Olympians. In fact, on the coaches side, Amy Deem and the great Stan Huntsman were also former Bobcats. With some support, good good coaching and good recruiting, OU could quite easily return to its past glories. 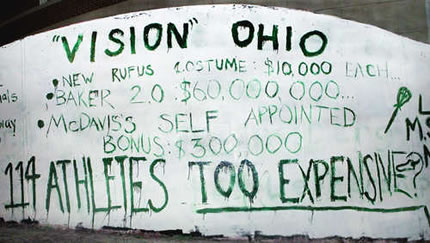 By dropping the program, the Bobcats added their name to the sad list of programs who have dropped men's track in recent years. Each case is unique but this one has some special circumstances which makes it especially sad. First, OU was title IX compliant before the decision. Many of the other schools that dropped their men's track programs have not been. For those who've been stuck in a closet since 1972, Title IX, rightly or wrongly has been used as justification to drop men's collegiate sports programs. Title IX says, "No person in the United States shall, on the basis of sex, be excluded from participation in, be denied the benefits of, or be subjected to discrimination under any education program or activity receiving Federal financial assistance." It doesn't say anything specifically about sports but it has been used to bring women's sports up to par with men's (in participation and in funds). This is a good thing….a great thing. Unfortunately, this has often come at the cost of many men's programs. The women's sports aren't to blame, it's the administrators who interpret Title IX to mean football and men's basketball should be able to have disproportionate financial allowances at the cost of other programs. Men's gymnastics, wrestling, swimming and track have been the biggest sports hurt by these decisions. On the surface, it would appear then that Title IX has nothing to do with OU's decision to drop track. Really this isn't the case though. It appears OU's athletic director, Kirby Holcott, has decided to use Title IX as a means to justify giving MORE money to a football program that is already receiving a disproportionate financial allotment. You see, the last few years, the Bobcats football team have been on the up and up. This year they won the conference and made a bowl game. This looks great for Holcott and staying true to the AD stereotype, it appears Holcott is only concerned with himself and the school's football program. This is sad because it's not as if OU football is a revenue sport. They are surely losing far more money than they make. I think the real reason behind this and other decisions like it are the selfish promotion and single mindedness of Athletic Directors who have their own pay check in mind rather than the hundreds of student athletes their decisions affects. When an AD is associated with football teams that turn themselves around or do very well, they are able to move up the ladder to bigger athletic (and better paying) athletic programs. In the end, the university is hurt, the overall athletic program is hurt, the sport is hurt, and the current student athletes are hurt. The only ones to benefit from decisions like these are the football team and the athletic director. Kinda selfish huh.

This decision is bigger than just OU though and it may have ramifications outside of Athens, OH. In fact, when all is told it may be the final straw in what would be an unprecedented move. Ohio University is the latest in a long list of Mid-American Conference teams to drop track, joining the likes of Bowling Green, Toledo, Western Michigan, Marshall and Ball State. There are now only 5 teams in the conference that have men's track and field programs….barely enough to hold a conference meet. If one more MAC school drops their men's track program it could be enough for the conference to drop men's track altogether. This would be an unprecedented move and it really isn't too far fetched. The only MAC school that is probably safe from the chopping block is Central Michigan because they already have the minimum number of sports to be considered NCAA D1 and couldn't drop another program and still be considered D1.

It's also bad for the sport. It basically means that it makes an already unbalanced situation worse. That is, because of 'Title IX equity' decisions, there are far less scholarship opportunities for men in track than ever before. This means takes away opportunities for developmental athletes and also reduces competition. More importantly it likely hurts the sport at the grassroots level.

If you think this decision is as bad as I do, please contact the following: