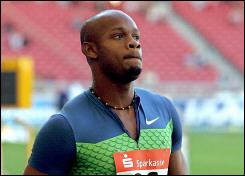 Powell broke the 100m world record in Athens, won a share of the Golden League Jackpot, won gold at the Commonwealth Games, and was named world athlete of the year.

The 24-year-old says that he hopes to replicate his form in 2007, with a 100m and 200m double at the World Championships in Osaka, Japan in August the being ultimate aim.

“Next year is the World Championship year and I just don't want people to expect anything different,” he told the Observer.

“We will see how the season progresses, but the plan right now is to consider doubling in the World Championships.

“To do both events is kind of difficult, but it depends on how the season goes.”

Powell is part of the elite “MVP” athletics club in Jamaica that also contains the likes Sherone Simpson, and Powell says all the athletes at the club are looking to have big years.