You are at:Home»Mike Young's Blog»Armstrong to use Performance Enhancers for NYC Marathon 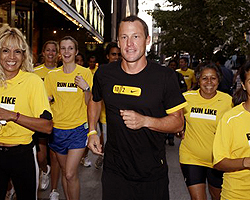 So much for not taking this seriously. Lance Armstrong has stated his intent to use performance enhancers for tomorrow's NYC marathon attempt. He believes these performance enhancers will help him to run under 7 minute miles for the full 26.2 mile race. Perhaps they will make up for his admitted lack of preparation. I mean even if the guy is a Tour de France god his goal of sub-3 hours is fairly lofty considering he's never run over 16 miles to prepare for it. Will people complain about his brazen use of performance enhancers. Why has it not been in the news more? Perhaps it's because his choice of performance enahancers is nothing new or revolutionary like EPO, gene doping or THG. Instead he's using outdated performance enhancers that were great in their day but would seem to have past their expiration date.

NEW YORK (AP) — Lance Armstrong will get a little help from an all-star cast of distance runners past and present when he makes his marathon debut Sunday.

Armstrong, who relied on the support of teammates to win a record seven straight Tour de France titles, will be paced by former marathon champions Alberto Salazar and Joan Benoit Samuelson, as well as reigning Olympic 1,500- and 5,000-meter gold medalist Hicham El Guerrouj, in the New York race.

"I wouldn't do it for anybody else," said Salazar, the last American winner of the New York City Marathon, way back in 1982. "I just wanted to spend some time with him."

The three will try to keep Armstrong, who ran triathlons as a teenager but never has attempted a marathon, to a 7-minute-per-mile pace.

Salazar, who works in the running department at Nike, resumed training when given the chance to run with Armstrong. He has been running 5 miles a day, six times a week, and is confident he can get through the first 10 miles. But that'll be it for the three-time New York winner.

"I'm kind of the slow link in this group, I'm an old man now," Salazar joked in a telephone interview Thursday from his Portland, Ore., office. "To try to go the full distance would be tough."

Armstrong has said he hopes to finish the race in under 3 hours. He will be running in large part to raise awareness and money for his foundation and for cancer research.